An Early Spark of Creativity

From a young age, Dani had an abundance of energy and creativity. Her parents encouraged her to explore her passions, and when dance classes, playing soccer, and drama courses didn't satisfy her, she found her love for art and reading. She would draw constantly, often finding inspiration in her favorite cartoons and books. The TV Show, Danny Phantom, proved to be a monumental influence on her art. It wasn't until high school where she started to take drawing more seriously. In addition to several drawing courses, she took painting, pottery, design, and photography classes. From the variety of mediums to choose from, she found an affinity with photography - which she had always enjoyed as a kid - and painting. She also took her first creative writing course and discovered that she had a talent for writing - which she had always enjoyed doing, but never considered pursuing as a career. During her senior year, she was President of the National Art Honor Society and started brainstorming her first novel.

Since 2010, Dani has had photography, poetry, and short stories published in several small journals, including VOICES, Swallow the Moon, and Echo Cognitio. She also earned several awards in the Scholastic Art and Writing Awards, including two certificates for print making, a certificate in photography, and a Gold Key in photography. Her self-published photojournalism book, Trans*parency: Revealing the Life of a Trans* Man won first place in Oakland University's 2015 Communications and Journalism Student Showcase. The Art of Falling was published through Dragon Moon Press in 2017. In addition to building her online presence and increasing her digital commission sales, she has attended multiple anime and comic conventions.

Dani attended Macomb Community College and Oakland University for her Associates in General Studies and her B.A. in Creative Writing. Over the course of five years, she took many writing courses that specialized in fiction, non-fiction, poetry, and screenwriting. She also continued to take painting and photography courses, as well as a photojournalism course that combined her love for storytelling and photography. While at Oakland University, she worked as a photographer and Photo Editor for the student newspaper, The Oakland Post. Any free time left after work and school was dedicated to editing The Art of Falling, which she drafted during the summer after high school graduation. 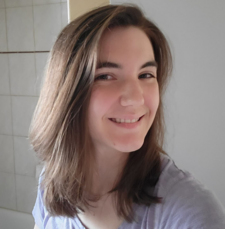