Map of the Universe

The universe created by Gloria and Chaos is a vast realm composed of two parts: the inner and outer planes of existence. The inner planes of existence contain the worlds where humans and mythos live. This realm is located within a safe zone called The Egg, which floats in the center of the universe. The outer plane is home to the Ethereal Kingdoms. Only celestial beings or the souls of the deceased can survive here. All beings that live above the Sea of Discord follow Gloria's ultimate command. Those living under the Sea of Discord follow Chaos' rule. 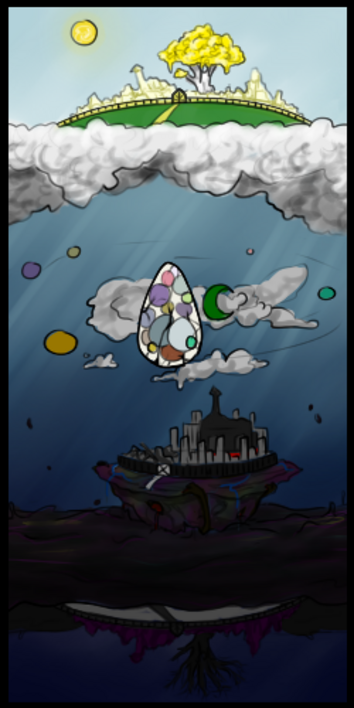 PURGATORY: Revolving around The Egg are moons that are home to lesser gods. The largest moon is Purgatory, which is ruled over by Malektil. He is the god of limbo and judgment. His job is to care for the souls while they wait for their eternal judgment. At times, he provides judgment for souls and sends them to their proper final resting place. Living on the moon with him are gargoyles, who care for the souls.

​​​THE EGG: Floating in the middle of the universe is The Egg. This is where the multiple mini universes and time periods of life reside. A  strong, translucent shell separates the outer realm from the inner realm. Inside the shell are various bubbles, each bubble containing a  universe. Some of the other bubbles are home to variations of the stable universe, while others contain completely different realms. Bubbles that press up against one another are connected, and are able to be traveled between by powerful mythos. Some powerful  mythos, who have angelic or demonic bloodlines, have the ability to cross through the shell of the Egg to venture into the outer planes. Those who are tempted by Chaos have devised ways to cross by corrupt magic, while others who remain loyal to Gloria can sometimes  be invited into the outer planes. However, the most common way to cross is to die.

EARTH: The second largest and most stable of all the worlds within the Egg. Humans are the main population of this world, however small groups of mythos do reside there. Magic is considered fantasy or a myth, and majority of the humans reject magic entirely. This forces mythos to remain hidden at all times.

THORNBRUSH: The second largest world within the Egg. This universe is connected to Earth through bridges where the bubbles touch. It is home to all mythos, where humans are the smallest population. Often considered the first world ever created, it is where many mythos find sanctuary. Yet some fear living in this plane of existence, where tyrannous rule of the Elves make living almost as difficult for mythos as it is on Earth.

FEYSEELE: The home of the fae-folk and pixies. It’s a small planet with much of the surface uninhabitable due to constant shifting plates. While quakes are frequent, two “bowls” are primarily stable, leading to life on the planet congregating there. The Greater bowl, Caraheen, is home to the Seelie court of Fairies and the Pixies. It’s a large, tropical paradise that the court has taken advantage of in the way of opening hotels and resorts from off-worlders. Honeymoons and parties are commonly held. The alcohol is strong, the fairies know a good party, and life in paradise is good. On the other side of the world is the smaller bowl, Nykrie. The Unseelie court rules there with an iron, ever-changing fist.

AMPHITHERE: This planet consists of a wide range of climates and terrain to suit the various breeds of dragons that live there. Dragons will describe it as their own personal Heaven, a place where all dragons will go when they reach old age to die peacefully among their kind. Overtime, they have been welcoming other mythos to join them in paradise, such as the merfolk who can easily inhabit the expansive ocean without causing too much crowding. Mountainous peaks and grassy forests cover the land, while the ocean seemed bottomless.

​LEATIS: This small planet is home to phoenixes. Despite its size, it has one of the most diverse ecosystems within the Egg. Biomes mesh together, creating unique territories for the many species of phoenixes to thrive. A volcano may be found in the middle of an icy tundra, or a lush rainforest may have patches of bone-dry wastelands. Due to its lack of density, it floats aimlessly within the egg, casually bumping into other bubbles and occasionally creating bridges that last for only a few years before separating and wandering off again. Due to it being nearly impossible to chart its travel and predict when a new bridge may open, a vacation to Leatis may end up lasting hundreds of years.

XIX: A gaseous planet most often compared to Jupiter. While not nearly as large, the creatures that live on this world are also gaseous or liquid in appearance, easily floating along with the giant wind storms that swirl over the surface. Deep into the clouds near the core is a solid mass, where large and elaborate structures are built. However, they are unable to be seen from the air. Uninhabitable by all other creatures except doppelgangers. Even denizens have a hard time navigating the planet.

THE GARDEN: The first world ever created, though considered a failed planet. This is home to the original mythos: the Nagwas and Anbanunkun. Originally a peaceful planet, consisting of only plants that eventually became saturated with magic to become The Green Children. Chaos and Gaia formed additional mythos to tend to the garden. However, most of the planet was destroyed after a tragedy that left most of the population dead. Now, only The Green Children, which have regrown and restored themselves after the disaster, live there along with the Walkers. The desolate planet is unable to be reached by outsiders, but their inhabitants may travel to other worlds with the risk of being unable to return.

​THE VOID: The universe in which all planes of existence are held. It is said that the souls of deceased ethereal beings make up the void, their energy powering the universe and life itself. To pull a soul away will cause irreparable damage to the psyche, and enough souls may damage the fabric of the universe itself.

REALM OF CHAOS: Coating the bottom of the universe is a deep sea of sludge, toxins, and muck called the Sea of Discord. It is the entrance to the Realm of Chaos. It is ruled over by Chaos, the primordial god of discord, corruption, and evil. It is thought to be a mirror of Gloria's universe. Souls that have given themselves up to Chaos are not allowed to stay within Gloria's realm and are doomed to sink into Chaos. Being banished to this realm is often considered a worse punishment than death.

TARTARUS: Floating on the Sea of Discord is the titan Tartarus. Also known as The Glutton, it is the son of Chaos. This prevents it from sinking into the sea. Due to a deal it made with Hades, the Kingdom of Hell is allowed to rest upon its back to protect the dense city from sinking toward the depths of Chaos.

HELL: Hell, once called Hades after its original ruler, is now ruled over by Jackal, the god of death. It is the realm where damned souls unworthy of Heaven reside. Originally, it was where all souls, good or evil, lived. However, when Hades started getting too full, Gloria decided to reward the good by letting them enter into Heaven. Hell is divided into ten circles. The top circle is composed of a giant city, and is home to all demons. The remaining nine circles are specialized to a specific form of punishment for the damned souls that were sent to Hell. These circles descend deeper into Tartarus, slowly getting closer to the Titan's mouth. The circles are Limbo, Lust, Gluttony, Greed, Anger, Heresy, Violence, Fraud, and finally Treachery.